Home › Education policy › Job satisfaction amongst secondary teachers in England is declining. Now we have some of the least satisfied teachers in the world

Job satisfaction amongst secondary teachers in England is declining. Now we have some of the least satisfied teachers in the world

Today, new results have been released from the TALIS 2018 survey – a study of the teaching profession conducted within more than 40 countries across the world. Along with Sam Sims, I co-authored the national report for England.

This blog will be short and not-so-sweet. The results make for rather grim reading.

What does TALIS say about job satisfaction amongst teachers?

There has been a clear fall in job satisfaction over this five-year period. Fewer lower-secondary teachers in England now believe the advantages of being a teacher outweighs the disadvantages (83% in 2013 versus 72% in 2018) and that they would still choose to work as a teacher, if they were to make their career choice again (80% in 2013 versus 69% in 2018).

At the same time, more lower-secondary teachers in England now express regret about their career choice and wonder whether they should have chosen another profession.

Figure 1. Change in job satisfaction of lower-secondary teachers in England. 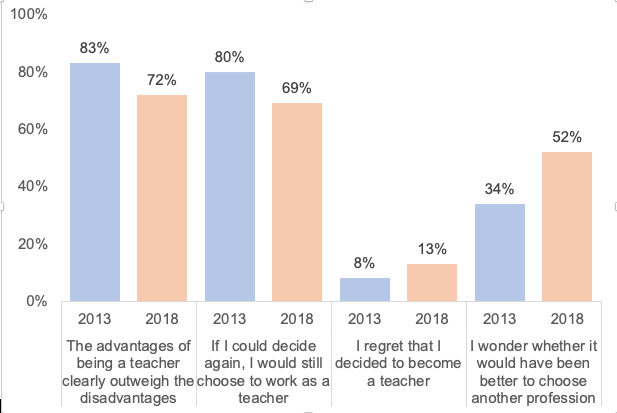 Notes: Figures refer to the percentage of teachers who agree or strongly agree with each statement. Source: TALIS 2013 (question 46) and 2018 (question 53) database for England. See the TALIS 2018 national report for England, section 4.3 for further details.

Figure 2 places these results into an international context. England, sitting in the bottom-right corner of the data points, is towards the bottom of the pack. Fewer teachers in this country say they would choose to become a teacher again than in other industrialised nations (69% in England versus an OECD average of 76%) with a greater proportion wondering whether they should have chosen another profession (52% in England versus an OECD average of 34%).

Notes: Dashed line illustrates the ordinary least squares line-of-best-fit. A steeper line illustrates a stronger cross-country relationship between the percent of teachers who agreed or strongly agreed that they should have chosen another profession and those who agreed or strongly agreed that they would become a teacher again. Red diamonds = high-performing countries, green triangles = low-performing countries, blue circles = countries with similar performance to England. Source: TALIS 2018 database; questions 53b and 53f.

Given on-going concerns in this country about the recruitment and retention of teachers, little more needs to be said about these results. Low levels of job satisfaction amongst secondary is clearly a serious problem in England; one that education policymakers need to urgently address.

5 comments on “Job satisfaction amongst secondary teachers in England is declining. Now we have some of the least satisfied teachers in the world ”