Home › International comparisons › We know teachers in England work long hours. But are they distributed equally?

We know teachers in England work long hours. But are they distributed equally?

John Jerrim.
We have written before about how teachers in England work longer hours, on average, than teachers in other countries. And this is an active area of government policy in England.

But the distribution of working hours of teachers also matters. Are some teachers not pulling their weight, while others are having to work excessive hours to cover for their workshy colleagues?

Although this is the case in some countries, England is not one of them.

Inequality in working hours across countries

The chart below plots TALIS 2018 data, and comes from a project comparing teacher working hours across almost 50 countries.

It shows the average working hours of full-time secondary teachers (horizontal axis) against inequality in hours (vertical axis) – measured as the difference in hours between the 10% with the shortest and longest working weeks. The dashed lines refer to the international averages.

First, as we already know, teachers in England work longer hours than teachers in most other countries.

Second, countries with longer average hours also tend to distribute those hours more unequally. In other words, in the chart, most countries fall into either the bottom left-hand quadrant (short average hours which are equally distributed) or the top right (long average hours with an unequal distribution). For those nerds who are wondering, the cross-country correlation is 0.53.

Third, England seems to buck this trend, sitting in the bottom right-hand quadrant. Although teachers in this country typically work longer hours than their international peers, we are slightly better than other nations at equally sharing this load.

The next chart puts some more flesh on the bones of this point. It compares the number of hours worked by the 10% of full-time teachers with the shortest working weeks to the 10% with the longest working weeks. Again the dashed lines show the international averages. 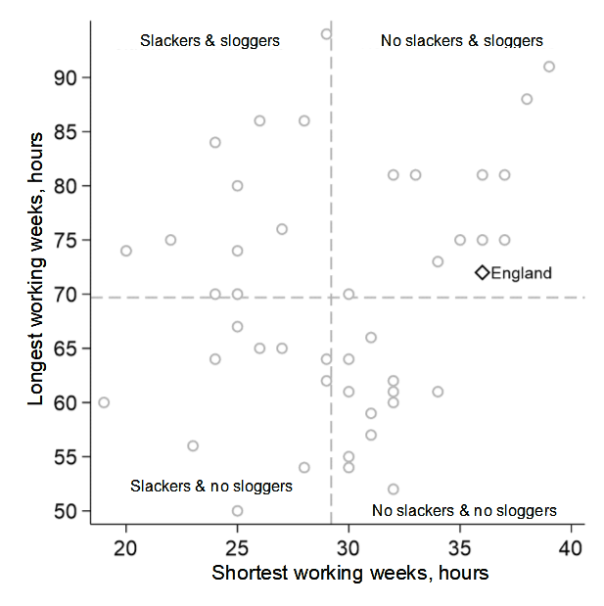 This helps us understand why the average working hours of teachers are longer in England than other countries.

It’s not because those with the longest working weeks are doing longer hours than teachers with the longest weeks in other countries (around 70 hours per week). This is illustrated by the fact that England sits reasonably close to the dashed horizontal line.

Rather, we don’t have any slackers. Even the 10% of full-time teachers in England reporting the shortest weeks puts in a shift of around seven hours each weekday (36 hours over the week). This compares with an international average for these teachers of around six hours each weekday (29 hours over the week). In fact, in the second chart, England is one of the furthest countries from the dashed vertical line.

Testament to the teaching profession

This result is in many ways testament to our teaching profession. They work hard, but share this burden as much as they can.

But it also means that we don’t have much slack left in the system.

Other countries with equally long average hours could try sharing those hours around more equally. But we don’t have that choice – more or less everyone is working their contracted hours at the very least.

The fact is that, if the government are serious about reducing teachers’ working hours in England, there are no obvious, easy wins.

Source: Analysis of TALIS 2018 data
Notes: Full-time teachers only. Based on summing together the time that teachers report spending on different tasks. Inequality in hours measured as difference between the 90th and 10th percentile of the working hours distribution. Dashed lines show international averages.

Comparison of the 10th and 90th percentile of teacher working hours across countries.

One comment on “We know teachers in England work long hours. But are they distributed equally?”